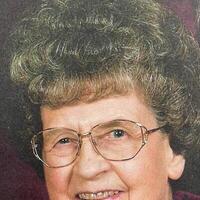 Houston- Mrs. Minet Omega Castles Blanton, 93, passed away on Saturday, September 5, 2020 at Floy Dyer Nursing Home in Houston, Mississippi. She was born in Houston, Mississippi on February 14, 1927 to Charles Lee Castles and Dorothy Lee Bryant Castles. Her father died when she was five, and her only sibling, Charles Columbus “Sonny Boy” Castles, died at age 22 months. She and her mother took care of each other until her mothers’ death in 1980. Mrs. Blanton was preceded in death also by her husband of 62 years, Dewey Bennett Blanton, in 2010.

Mrs. Blanton was a life- long member of First Baptist Church in Houston. She was a very faithful and active as long as her heath allowed. She was a Christian, and she lived her life in a way that set a wonderful Godly example to all who knew her.

Mrs. Blanton was a business teacher who retired after 40 years of teaching, with 37 of those served at Houston High School and Houston Vocational Center. She was often referred to as one of the most influential teachers in the lives of her former students. She received many awards and accolades during her career.

Graveside Services will be held at Houston City Cemetery on Monday, September 7, 2020 at 10:00 A.M. at with Dr. Daniel Heeringa officiating.

Burial will be held at Houston City Cemetery in Houston, Mississippi.

Mrs. Blanton is survived by her sisters-in-law Etheleen Blanton of Houston, and Barbara Blanton Carnes of Williamsburg, KY, several nieces and nephews, and a host of friends. She will be sorely missed by this community and all who knew her.

Mr. and Mrs. Blanton set up a scholarship fund that has provided scholarships for hundreds of college- bound students. In lieu of flowers, donations to be made to: