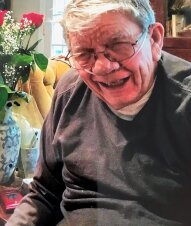 (February 15, 1925- September 3, 2020)
Harold Adams Thompson was born on February 15, 1925 in Campton, Georgia. He was the fifth child of Roy Lee Thompson and Clarice Adams Thompson. Because both of his parents had died by the time Harold was fifteen, he was raised by his sisters, Mary and Becky Thompson. Harold demonstrated distinguished musical talent at a young age. Becky and Mary supported him and paid for his piano lessons. After entering the University of Georgia, his academic studies were interrupted by military service during World War II. While in the Army, Harold was awarded the Purple Heart and three Bronze Stars. Upon his return from service in World War II, he completed his Bachelor of Music degree in piano at the University of Georgia in Athens. There in Athens, Harold met Frances Benson. They married on August 9, 1951 in Ann Arbor, where he was completing his Master of Music degree in piano at the University of Michigan. He also pursued private piano studies with Eugene List of the Eastman School of Music. Dr. Harold Thompson earned his PhD from the LSU School of Music, where he studied the piano in the studio of Jack Guerry. Harold joined the faculty of Mississippi State University in 1970, after serving in two previous appointments at Jacksonville State University (Alabama) and at Radford University in Virginia. Dr. Thompson maintained a large private piano studio in Starkville for over forty years. Under the auspices of the Mississippi Music Teachers Association, Dr. Thompson founded Mississippi Piano Showcase, for which he served as Director until his retirement from MSU. In 2012, Dr. Thompson was honored as the sixth MTNA Foundation Fellow, selected by the Mississippi Music Teachers Association. In recent years, Dr. Thompson was named Professor Emeritus, a fitting honor for his many years of distinguished service on the faculty at MSU.
Harold Thompson died peacefully in his sleep at his home in Starkville on Thursday, September 3, 2020.

He was preceded in death by Frances, his wife of sixty-eight years. He is also survived by four children, three grandchildren and one great grandson. His oldest son, Dr. Christopher Thompson, resides in Pontotoc with his wife, Dr. Laura Thompson. Harold’s only daughter, Dr. Margaret Thompson, resides in Atlanta with her husband, Walter Brown. Harold’s son John lives in Austin, Texas. The youngest, Charles, lives in Athens, Georgia. Harold Thompson is survived by three grandchildren. Martin and Lena Brown, children of Margaret and Walter, reside in Atlanta. Suzanne Doerfer, daughter of Christopher and Laura, resides in Houston, Texas, with her husband Andre Doerfer and their son, Maximilian Doerfer.

A memorial service at Trinity Presbyterian Church in Starkville will be planned and announced at a later time.

In lieu of flowers, the family would appreciate donations to the Mississippi Music Teachers Association at msmusicteachers.org.