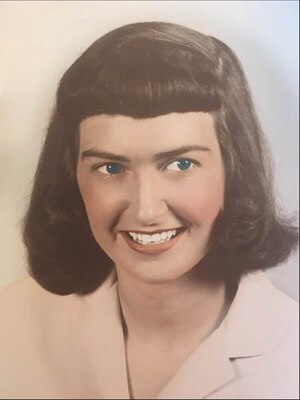 Francis Marie Nixon Phillips was born in Paden, Mississippi on May 26, 1934, the fourth child of Robert Arden Nixon and Mattie Delila (Lila) Owens Nixon. She passed away on October 15, 2020 in Denison, Texas.

After graduating from Paden High School in 1952, she attended Northeast Junior College.

Francis lived her life as a wife, mother, daughter, musician, songwriter, artist, family historian, avid reader, and studier of her Bible and encyclopedias. Her curiosity for current events and history never waned. She loved country and gospel music and spent every Friday and Saturday nights listening to RFD-TV.

Her favorite places to be were with her family and friends, especially attending Paden Homecomings.

In 1955, she married an Air Force officer, Ronald G. Castleberry, the father of her three children. During the next 17 years, she was able to travel to Europe, Japan and Korea, learning of each culture and its beauty. While living in Japan, she studied floral design and Japanese cooking. During this time, she volunteered to help wounded soldier families at the height of the Vietnam War.

In 1972, she and Ron opened Castleberry Florist in Denison, Texas and she had the opportunity to use her creative talents in designing beautiful things for others.

Francis was well known for her musical talents and entertaining on the piano at family functions and senior citizens at nursing homes. She played the instrument by ear and was completely self-taught, teaching herself initially on a small piano in a community church. Everyone who ever met her was amazed by her talent. She was once even offered a job to play in a nightclub in Las Vegas. She had the unique opportunity to record a CD in a Nashville studio a few years ago, always with the hope of “being discovered”.

In 1991, she married J.W. (Joe) Phillips and settled in Booneville, MS, a few miles from the town in which she grew up. She and Joe enjoyed a retired life in northeast Mississippi with an occasional visit to the casino, coordinating Paden Reunions, decorating the family graves and doing part-time work in flower shops.

She lived her last couple of years with her daughters in Texas, enjoying their cooking and being spoiled by their attentiveness.

She is preceded in death by her husband, J.W. Phillips, her parents and her brothers, Roy Nixon and Robert Owens Nixon.

Francis is survived by her daughters, Ronelle Castleberry Ianace and Sherrie Castleberry, both of Denison, Texas and her son, Michael Castleberry of Paden, Mississippi.

She is also survived by two sisters, Bobette Turnipseed of Tampa, Florida and Marion Cadle of Booneville, Mississippi, and one sister-in-law, Judy Nixon of Chattanooga, Tennessee.

Her many nieces and nephews will miss her very much as will her daughter’s Ianace family who adopted “Mama Fran” as their own: Ernie (Jessie), Lisa (John) and Peter (Sarah) and their children.

Arrangements for Francis Phillips are being handled by McMillan Funeral Home in Booneville, Mississippi. Services will be held on Tuesday, October 22 at 2pm at the Forked Oak Church with a graveside service in the Forked Oak Cemetery to immediately follow.