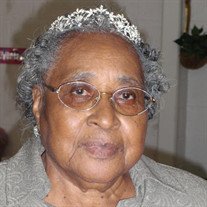 Lucille Turner Joseph, age 92, of Water Valley, MS died Saturday, October 31, 2020, at Yalobusha County Nursing Home. Being born to Clayton and Elsie (Person) Turner on October 18, 1928, Lucille was a person of strong moral character and was never afraid to work. This was evidenced by her career. She not only worked at the Water valley Laundry and later at the Davidson Elementary, but volunteered for many years working on the election committee and doing seamstress work up until her health precluded her from doing so. Lucille was also a past member of The Order of Eastern Star. Lucille also served The Lord in Everdale Church as an usher and a church mother. She enjoyed fishing, sewing, quilting, crossword puzzles, and cooking her scrumptious fried pies. But nothing was more important to her than her family.