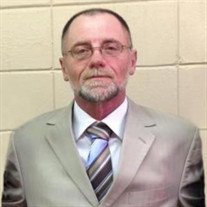 Amory – Timothy “Skillet” Marrison, 57, passed away on Friday, October 30, 2020, at North Mississippi Medical Center, Tupelo, Mississippi. Born on December 4, 1962, in Amory, he was the son of the late Ivy and Mavis “Sis” Langford Marrison.

Skillet grew up in Monroe County and decided at an early age that he was going to leave school. Upon learning this, his mother told him he must go to work and that same day he did just that. That day, as he was walking, he came across some men working on plumbing at a business. He asked if they were hiring and the rest was history and for over 40 years he worked with Minga Plumbing, Heating and Air where he eventually became a Master Plumber. His co-workers said he was a hard worker, energetic, and always told you the truth whether or not you liked it. He got his nickname “Skillet” while working and it stuck for many of those who were close to him.

Tim also served briefly with the Mississippi National Guard and he was proud patriot. A great provider, he was blessed by God with a loving family, two sons, a sister and brother and four grandchildren. A true family man, he enjoyed helping take care of his grandmother, Lorene Box, before she passed away. Skillet really enjoyed being a Grandfather and it made his smile light up every time they were around him. He loved his best friend, Tammy Bennett Marrison, and his children and grandchildren. Tim was Baptist, believed in the Lord, and he lived out his faith by giving and loving others. He was passionate about LeBonheur Hospital.

A true cut-up, Skillet was always talking, and some of his best friends were his boss, Buddy Minga, his neighbors, Petey Bennett, Mitzy Frederick, Chad Todd Barry Todd and Esker Lowder. He made many great memories with them and they will be cherished forever. Tim liked to listen to country music and some of his favorite songs were I Can Only Imagine and Long Black Train. In his free time, he liked to work on fixer-upper jobs and woodworking.

His family and friends will miss him dearly and they will always remember the good times with him. They have peace knowing that he is completely healed and with the Lord.

In addition to his parents, he was preceded in death by his brother, David Hugh Harlow, who passed while serving in the Vietnam War.

Donations, to help support the family, may be made directly to the funeral home, PO Box 127, Amory, MS.

Donations in lieu of flowers may also be made to LeBonheur’s Children’s Hospital, PO Box 41817. Memphis, TN 38174.