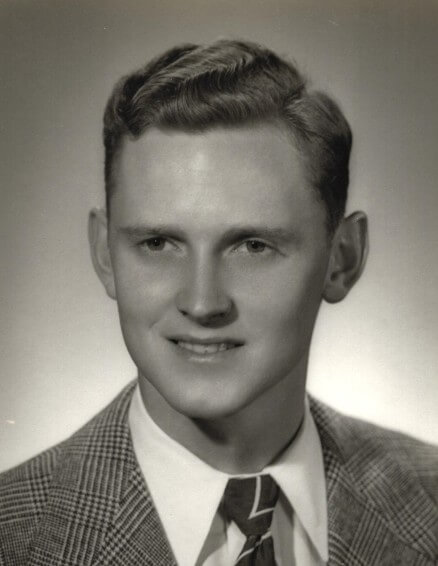 TUPELO – William Harrison “Billy” Moore began his second tennis career to play for our Lord and Savior Jesus Christ on All Hallows’ Eve, October 31, 2020.  Billy was born on August 22, 1929 in Tupelo, MS and was the only son of Mary Thompson and H. T. “Titus” Moore. Billy was a graduate of Tupelo High School where he learned to love the game of tennis, played first trumpet in the band and served as drum major. Billy was a graduate of Vanderbilt University where he earned a Bachelor’s Degree in Civil Engineering and played tennis for Vandy.  In 1952 he was commissioned as an officer in the United States Air Force. Billy began his career as chief engineer of construction at Southern Sash Sales & Supply in Nashville, TN. In 1960, he began his career of 33 years with the Defense Logistics Agency of Memphis, TN and retired in 1993 as Chief Engineer. Billy met his lifelong love, soul mate, and wife, Carolyn Waters Moore, at Tupelo High School. Billy and Carolyn married on June 26, 1953.  Upon retiring in 1996, Billy and Carolyn returned home to Tupelo where they renovated the family home at 120 Robins Street. Billy continued to pursue his love of tennis, gardening, and he served on the downtown historical architectural committee.  He was also an active member of the First United Methodist Church.

Billy is survived by the love of his life, Carolyn, and his two children, William H. Moore, Jr. MD (T.J.) and Lisa M. Cook (Jeff), and his two grandchildren, Claire Moore Lankford (Brett) and William H. Moore, III.  Billy is survived by numerous cousins and many dear tennis friends.  The family would like to give special thanks to the Olde Towne Tennis Group for its camaraderie, sportsmanship, and for befriending Billy for almost twenty-five years. The group includes: Larry Brock, Curtis Brown, Henry Dodge, Mike Gratz, Henry Hankins, Tom Hansberger, Arthur Harrison, Jim McCormick, Mike Olmstead, Jack Reed, Jr., Tony Rueff, Bobby Stanford, Richard Tucker, Tom Wooldridge, Marion Winkler, Heyward Washburn, and the late Leighton Pettis and Thomas Mize. Billy was an accomplished tennis player and was ranked 5 th in singles in the state of Tennessee at age fifty-five. In 2010 Billy was on the Mississippi State Championship Tennis Team and participated in the USTA Southern Championships at Hilton Head Island, South Carolina at age eighty. Billy Moore taught his children and grandchildren to play and love the game.

A memorial service will be held at 11 AM on Saturday, November 7, 2020 at First United Methodist Church in Tupelo, MS with Rev. Sam Marshall and Rev. David Shumaker officiating.   Burial will be in the Thompson family plot at Glenwood Cemetery in Tupelo.

The family would like to thank Sanctuary Hospice of Tupelo for its love and care.  We would also like to thank Attendant Care Services of Memphis, including faithful attendants, Kathryn Coleman Feinstone, President, Whitney Thacker, LPC-MHSP, Kate Morris, RN Ed. BSN, Verna Wilson, and Vera Ford for their love and support. We also thank Carolyn Judon for her love, care, and many acts of kindness these last few years.

In lieu of flowers, memorial donations may be made to Sanctuary Hospice House, P.O. Box 2177, Tupelo, MS 38802, or First United Methodist Church, P. O. Box 854, Tupelo, MS 38802. Holland Funeral Directors-Tupelo Chapel is honored to be serving their friends.  Condolences may be emailed to hollandfuneraldirectors@comcast.net.