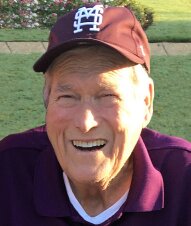 A graveside service will be held on Thursday, November 12, 2020, at 2:00 P.M. at Memorial Garden Park Cemetery in Starkville, MS. Visitation for family and friends will be held at the graveside beginning at 1:15 P.M.

Hayes Truitt was born on August 9, 1941, in the Possumneck community of Attala County to Howard Hayes Truitt, Sr., and Celeste Cade Truitt. He graduated from Durant High School where he lettered in basketball and football. While working full time for the Chevron Corporation (formerly Standard Oil of California), he graduated from Mississippi College with a Business degree. Mr. Truitt managed facilities for Chevron in Meridian and Collins, MS, Perth Amboy, NJ, and Commerce, CA, before retiring from the Chevron headquarters in San Francisco, CA. After working 34 years he and his wife retired to Starkville, MS, to be close to family.
One of his greatest enjoyments was being a member of the Kiwanis Club. Through his membership in the Kiwanis Club, he was able to volunteer with many activities that supported the club’s efforts to help children. He especially enjoyed working concessions at Humphrey Coliseum with his fellow Kiwanians. He was an active member of First Baptist Church and the Berean Sunday School class. Mr. Truitt also enjoyed his friends and the staff at the Wellness Connection Cardio Rehab Center. He enjoyed working in his shop building birdhouses and Little Free Libraries for family and friends. His other interests included coin collecting, traveling and MSU sports.

Mr. Truitt is survived by his wife, Judy Worrell Truitt. They met in high school and were married for over sixty years. He is also survived by his children Michael Hayes Truitt (Becky) of Round Rock, TX, and Suzy Houston (Russ) of Starkville, MS; his grandchildren Rebekah Overstreet (Jeff) of Hernando, MS, and Michael Houston (Lauren) of Fayetteville, AR; and his great grandchildren Brannan, Brady, and Berkeley Overstreet. Mr. Truitt is survived by a brother David Truitt (Beth) and two sisters Linda Hutchison and Cindy Dickerson (Jeff) and many nieces and nephews.

The family would like to thank the staff of Fresenius Medical Care of West Point and Tupelo and North Mississippi Medical Center Home Health nurse, Kylie Patterson, for their care.