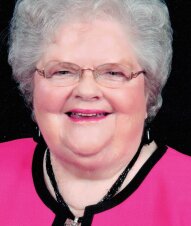 Genevieve Wallace Malone Swartzberg 88, died November 23, 2020 at OCH Regional Medical Center. Genevieve became a Christian and accepted Jesus Christ as her Lord and Savior at the age of 10 years old at Longview Methodist Church. She loved serving God as HIS servant so that her life could be a witness for Jesus Christ. Genevieve was born November 16, 1932 in Longview, Mississippi, and graduated from Starkville High School, Starkville, MS, and Jackson Commercial College in Jackson, Mississippi. She retired from the U.S. Department of Agriculture in 1996 after 39 years of service.

A drive by visitation will be held from 1-2 PM on Saturday November 28th 2020 at Memorial Gardens Park in Starkville, MS with a social distancing graveside service following at 2 PM with Brother Jason Middleton officiating. Welch Funeral Home is in charge of arrangements.

In 2016 she became a member of Meadowview Baptist Church and was a member of Fern Strahan’s Sunday School Class and the Senior adult Joy group. She participated in activities of the Church wherever she could serve.

Genevieve found joy in her volunteer time tutoring with the Starkville elementary schools. She enjoyed playing bridge and was a member of several bridge clubs. She loved cooking and sharing with her family, friends, neighbors, shut-ins and/or Christian activities.

Genevieve was a member of the Mississippi Senior Golf Association and enjoyed playing golf with the group as well as playing at the Starkville Country Club with friends.

She was an avid Mississippi State University sports fan and donated as a member to the MSU Bulldog Club Athletics.

Genevieve will be remembered by her Christian witness, generosity, and sweet smile. She leaves many cherished memories; was much loved by her family, and will be greatly missed. The family would like to thank Dr. Everett McKibben and Laird Clinic for their many years of care and the staff of OCH Emergency Room and ICU for their outstanding and compassionate care during her illness. Memorials may be made to Meadowview Baptist Church or to the charity of choice.