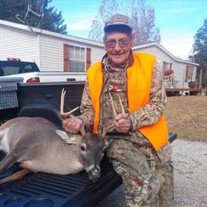 Larry Ray Miller, 76, passed away on Sunday, November 29, 2020 at his home. Larry was born on March 1, 1944 in Monroe County to Rubel and Frances West Miller. He attended Becker school and later graduated from Hatley High School. He married the former Linda Sheely on November 22, 1962. When his country called, he answered, and he was a proud U.S. Army veteran who served in Vietnam. After his time in service, he began a career that would span 40 years at Amory Tire and Rubber Co. where he made many lasting friendships through the customers he helped along the way. Larry was all things outdoors. He loved fishing, especially with his son Chris and when he was in the woods, he was always on the lookout for the big one that might walk out; but the pride of his life was his grandchildren and great grandchild and loved to spend as much time as he could with them. He loved to travel to the mountains with his family; and he shared a special bond with his brother, Roger and his hunting buddy, Jerry. He was Baptist in faith.

Funeral service will be at 2 p.m. on Tuesday, December 1, 2020 at Cleveland-Moffett Funeral Home in Amory with Bro. Charles D. Moffett officiating. Burial with Military Honors will be in the Hatley Cemetery.

He was preceded in death by his parents; one brother, Danny Miller; and one sister, Carol Weaver.

Visitation will be on Monday evening from 5 until 7 p.m. at the funeral home.