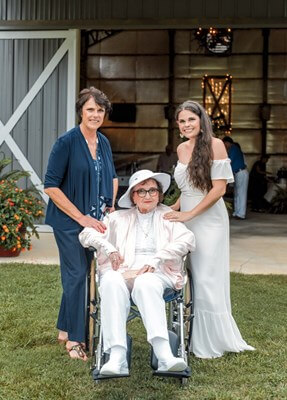 Peggy J. Johnsey Lancaster, 88, passed away at home on Friday, December 25 2020. A private family service will be held to honor her life. She will be laid to rest next to her husband at Union Baptist Church Cemetery in Corinth, MS.

She was born in Alcorn County, MS to William “Bill” Johnsey and Lillian Crow Johnsey on May 27, 1932.
She graduated from Thrasher High School in 1951. Peggy married Max Wade Lancaster on May 17, 1952 and remained married 60 years until Max’s death in 2012. She worked for South Central Bell Telephone Company until they moved to their farm in November 1960. Peggy and Drucilla Jobe owned and operated Kossuth Variety Store from 1970-1975. Later, her son opened Lancaster’s BP Station, where she helped him. Her most enjoyable profession was homemaker. She and Max worked diligently and built a wonderful life together. She loved and cherished her family, especially her grandchildren.

She is survived by her daughter, Jan Lancaster Haley (Jeff); her son, Fred Lancaster (Aimee) all of Corinth, MS; grandchildren, Jill Haley Gugliuzza (Marc) of Brooklyn, NY, Jake Haley and his girlfriend Holly Travis of Arlington, VA, Josh Haley of Corinth, and Tyler Brock (Yessenia) and their daughter Naomi of Ripley MS; one sister-in-Law, Clara Faye Lancaster of Corinth; and a host of nieces and nephews that she loved like her own children.

She was preceded in death by her husband, her parents, brothers and sisters Bobby Johnsey, Billy Johnsey, Eunice Johnsey Moore, and Una Johnsey Turner.

In lieu of flowers, a contribution can be made to Union Baptist Church Cemetery Fund c/o Carol Bynum: 124 County Road 420, Corinth, MS 38834.

Fond memories and expressions of sympathy may be shared at www.memorialcorinth.com for the Lancaster family.