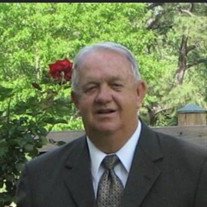 Duke graduated from West Point High School, Class of 1956. He attended Mississippi State University. He was a huge M.S.U. fan and attended many football, basketball and baseball games. In 1955, Duke joined the Mississippi National Guard and served for six years, nine months and twenty-eight days.

Duke worked for Mr. John Bryan where he sold and rented homes. Later he went to work for Building Service Company of West Point, which he managed for seventeen years. Duke retired from Weyerhaeuser Company of Columbus, Mississippi.

Duke was a member of First Baptist Church of West Point and a member of the Adult 6 Sunday School Class.

In addition to his parents, he was preceded in death by his sister, Bettie Lippincott Halliday.

Funeral services will be Tuesday, January 12, 2021 at 3 p.m. from First Baptist Church with Rev. Dale Funderburg officiating. Burial will follow in Greenwood Cemetery in West Point. Calvert Funeral Home of West Point is in charge of arrangements.

Visitation will be from 1 to 3 p.m. before the funeral service.