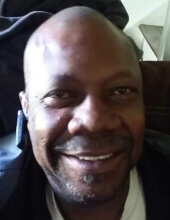 Robert accepted Christ at a young age & joined Mt. Peel M.B Church in Holly Springs Mississippi. He later moved to Aurora, IL in 1989. When Robert arrived to Aurora he held several jobs. He stood side by side with his uncle opening a detail shop.

Robert was a friend to many. Whenever you saw him you saw a smile. He was a loveable son, father, grandfather, brother, uncle, nephew & friend.

Graveside Service will be held on Saturday, January 16, 2021 at 12 Noon at Mt. Peel M.B. Church Cemetery in Holly Springs. Serenity-Autry Funeral Home of Holly Springs is in charge of the arrangements.

Visitation will be on Friday, January 15, 2021 from 4-7p.m., at Serenity-Autry Funeral Home Chapel in Holly Springs.