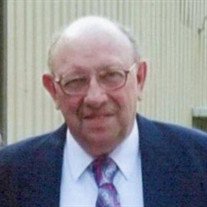 Wesley Lee Creighton, 75, passed away on Wednesday, April 14, 2021 at Baptist Memorial Hospital in Oxford, MS. He was born January 6, 1946 in Ripley, MS to the late A.E. and Pauline Tigner Creighton. He was a graduate of W.P. Daniel High School, Class of 1965 and a graduate of Northeast Mississippi Community College. He served in the U.S. Air Force, during the Vietnam War as a Staff Sergeant. He was a member of the American Legion Post 72. He retired from the furniture industry and was currently serving as 1st District – Union County Election Commissioner.
He was a member of Temple Baptist Church in Myrtle, where he served as a deacon for many years. He was a wonderful Christian example for his family and others around him. He will be remembered by many for his smile, warm personality and zest for life. He enjoyed playing golf and watching sports, especially Ole Miss.
He is survived by his wife of 53 years, Paula Byers Creighton; his daughter, Amy Creighton of New Albany; his sister, Joann Munn (Erich) of Ripley; his sister-in-law, Barbara Byers; his nieces, Staci Lewis (James) and Shelley Akins (Sean); and a nephew, Jason Liddell.
Visitation will be on Saturday, April 17, 2021 from 12:00p.m. until service time at 2:00p.m. at United Funeral Service with Bro. Donnie Schuman officiating. Burial will be at Glenfield Memorial Park. The deacons of Temple Baptist Church will serve as pallbearers and the American Legion Post 72 will conduct military honors.
In honor of his military service to his country, United Funeral Service will fly the U. S. Air Force flag during his visitation and funeral service.
Memorials may be made to Temple Baptist Church or to Union County Good Samaritan, where he served as a board member.