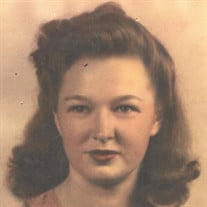 Virginia Ruth Mayhew Wood was born on August 10, 1925 to Henry Ivan and Ora Allee Graham Mayhew in the recently established Etta, Mississippi, previously known as the Rocky Ford Community of Union County.
Her older brother, Henry Clyde Mayhew, may have influenced her as she was often attired in denim overalls and short hair in her youth. In 1943 she was Valedictorian of Macedonia High School and graduated from Wood Jr College in 1945 majoring in English with a plan to teach. However, while picking up mail at the post office/ bus stop she caught the eye of a previous acquaintance now arriving home from his service in WWII. After pursuing her for a while, this young man heard of a Singing Event where he thought she might be, so he made a point to attend. She was there! At some time, during all the singing he heard her say she was thirsty. He saw this as his chance and brought her a cup of water. After a short courtship, they were married on August 12, 1945. The blend of his smooth tenor and her perfect alto would entertain many throughout their marriage.
She did complete her English degree from Blue Mountain, but did not make it to the classroom. Instead, In 1959, after feeling the call to ministry she became the first woman licensed to preach in the Methodist Church in Mississippi, three years later becoming the first ordained female Methodist minister in Mississippi. She served Pleasant Grove, Liberty, Crossroads, Jumper town, Blackland, Oak Grove, Carolina, and Grace United Methodist Churches in Booneville; Dennis, Golden, and Old Bethel United Methodist Churches in southern Tishomingo County; Box Chapel, Hopewell, and Indian Springs United Methodist Churches in Alcorn County; Walls, Lake Cormorant, and Robinsonville in DeSoto and Tunica counties. She retired after 29 years in the ministry from Byhalia United Methodist Church in 1988.
Grandchildren, and others, enjoyed the talent of her cooking. For many years breakfasts were blessed with syrup and biscuits or gravy and biscuits. Stove top popcorn in just the right pan, and Pepsi floats were a staple at Grandmother’s house. Too many cake recipes are referred to as just “Grandmother’s Cake”; or chicken casserole, or fruit salad, and no green beans could even pretend to compare to hers! She sewed countless cheerleader, band, and choral uniforms, custom dresses and outfits. She cross-stitched, knitted, crocheted, and quilted. She loved to sing, play piano, and only a few know of her great dancing skills. One had to be brave and quick to accompany her when shopping, driving, or running away from the assisted living home. She had as many favorite hymns and songs as she had favorite desserts. One that held a special place in her heart was “Brighten the Corner Where You Are” and she did!
Ms Ruth was called home on Monday, May 24. She is survived by sons Hugh Michael “Mickey” Wood (Ann) of Booneville, Mississippi, and Donald Mayhew Wood (Paula) of Olive Branch, Mississippi. Grandmother is survived by 8 grandchildren: Laurin Wood Simpson (Brad), Leigh Wood Stauffer, Juliet Wood Henderson (Joey), Paul Michael Wood (Rebecca), Charles “Charley” Graham Wood (Britney), Kathryn “Kitty” Wood Johnson (Luke), Rebecca Wood Fiorentini (Tony), and Frances “Francie” Wood Wilson (Jason). She is survived by 18 great-grandchildren and 5 great-great grandchildren.
Ruth was preceded in death by a baby sister, her parents, her brother, her beloved husband, Brother Huey Edward Wood, and a great-grandson, William Ryan Simpson.
Visitation will be Thursday, May 27 at Booneville Funeral Home from 5:00 – 8:00 p.m. The funeral will be Friday, May 28 at 11:00 a.m. at Booneville Funeral Home. Burial will be in Salem United Methodist Church Cemetery. Booneville Funeral Home is in charge of arrangements.