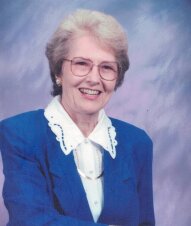 Mayzelle L. Wood, 94, of Starkville, MS, passed away on Monday, May 24, 2021 after a long illness. She was born August 26, 1926 in Tiplersville, MS; she was the fourth child of Luke and Mary Elizabeth Lancaster, who preceded her in death.

Mrs. Wood was a retired teacher and homemaker and an MSU graduate. She was a member of First Baptist Church in Starkville, where she was a part of the Joy Sunday School class.

Sewing, cooking, and reading were hobbies she enjoyed. Mayzelle also enjoyed walking with friends in her neighborhood, working in her yard, and caring for her home before her health began to fail.

Mrs. Wood is survived by her son, Lee Cecil Wood, Jr. (Melissa) of Huntsville, AL; and daughter, Janis Elizabeth Wood of Starkville, MS.
She also leaves behind a brother, Rayford Lancaster of Olive Branch, MS; a sister, Mynelle Teague of Ripley, MS; and a number of nieces and nephews.

Memorials can be made to: First Baptist Church Children’s Building Fund or French Camp Academy.

Visitation is scheduled for Thursday, May 27, 2021 from 10:00-11:00 a.m. at Welch Funeral Home in Starkville, MS, with the funeral service immediately following in the funeral home chapel. Burial will be in Memorial Garden Park Cemetery in Starkville.