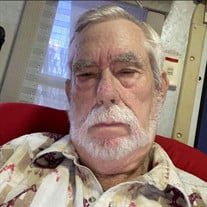 Marlin Russell Jr., age 75, of Oakland, MS died unexpectedly Thursday, June 17, 2021, at his home. He was born November 22, 1945, in Calhoun County, MS to the late Marlin Russell Sr. and Nellie (Mooneyham) Russell. After leaving school, Marlin served our country in the United States Army National Guard. He spent his career as a truck driver, spending most of those years driving for LMT Trucking Company. Marlin was a down to earth man who enjoyed the simple things in life. Those passions were hunting, fishing, and of course his family.

Visitation is planned for Saturday, June 19, 2021, in the Gardiner Room at Seven Oaks Funeral Home from 5:00 PM until 7:00 PM. Services will begin at 3:00 PM Sunday, June 20, 2021 at Oakland Baptist Church with Bro. Jimmy Hood officiating. Burial will be in Lambert Cemetery.

Along with his parents, Marlin was preceded in death by his wife, Carolyn Russell; one son, Marlin Lee Russell; and one brother, Jimmy Russell.