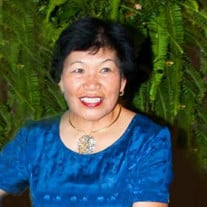 Virginia Franco Saldua Knight, 73, passed away peacefully on Tuesday morning, the 6th of July, 2021, at North Mississippi Medical Center in Tupelo. Her mind was still sharp and strong-willed, but her body could go on no longer.

Born in Manila, Philippines, on December 27, 1947, Virginia was the oldest of ten; those who knew Virginia well would not be surprised to learn that, even from an early age, she helped her parents care for her younger siblings. Later, she went on to earn a Fashion and Business degree from Francisco College in Manila and eventually departed the Philippines on various endeavors that took her around the globe, including serving as an au pair in Hong Kong.

In the early 1980s, Virginia shared correspondence with her future husband, Elvis Knight (now deceased), for more than two years before coming to America and exchanging wedding vows in 1984. Her only child, Vincent, was born a year later, and Virginia spent his early childhood as a stay-at-home mom, frequently sewing and altering clothes and crocheting various items. As she became more comfortable in her new home, Virginia eventually achieved United States citizenship as well as earning a Mississippi Driver License (she was incredibly proud of both achievements but secretly more pleased with the latter).

Virginia made scores of friends with her kind-hearted soul but also had a streak of stubbornness and the ability to deliver a blunt opinion without hesitancy. Her personality was such that anyone she met instantly knew that she never meant any harm to anyone (except maybe the odd snake in her meticulously manicured yard). Known not only for her green thumb, Virginia also liked showing off her delicious cooking, although many may not know that, despite earning a food service certification and providing many people with delicious egg rolls, pansit, and other delicacies, she had zero culinary skills before immigrating to the US and phoning home for recipes of the missed meals of her homeland.

Virginia has touched many lives, young and old, over the years; Virginia ran a daycare from her home while living in Louisville, MS, and has stayed in touch with some of those kids for 20+ years; others will know her primarily from being an enthusiastic and successful Mary Kay salesperson for a couple of decades. Her family in the Philippines will also note how often she sent money back to her homeland for the sole purpose of school supplies and education for the numerous children in her own extended family. But the dearest to her heart will always be her sole grandchild, Chessa, born in 2019; the two were inseparable best friends, dancing to and serenading Abba to each other one moment and frolicking in the outdoors the next.

Left behind to treasure her memories are her son, Vincent Knight, daughter-in-law, Anna Hutto-Knight, and granddaughter, Chessa Knight, all of Leland, MS; in addition, she is survived by her sisters, Vilma Cielo, Emma Whittaker, Ofelia Erenaya, and Josephine Hollero, and her brothers, Robinson Saldua, Superiano Saldua, and Florentino Saldua.

In addition to her father, Mabini Saldua, and mother, Rosita Franco Saldua, she was preceded in death by her husband, Elvis Lavoy Knight, her brother, Pepito Saldua, and sister, Julie Saldua.

A memorial mass will be held on Monday, July 12, 2021, at 10:30 am, at Virginia’s beloved St. Helen Catholic Church in Amory, MS, with Father Joseph Le and Sister Lael Niblick officiating. A brief visitation will be held at St. Helen at 10:00 am, prior to the mass. In lieu of flowers, Virginia’s family requests that donations be made in her honor to help support children in the Philippines to whom she frequently sent money to help with school supplies and furthering their educations. See more information at: https://www.gofundme.com/manage/virginia-knight-memorial-education-fund.

Other memories and condolences may be shared with her family at EEPickleFuneralHome.com