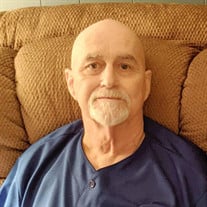 Roy attended both the Wren and Amory Schools. He worked as a presser in the frame shop at MTD in Verona for 14 years, as well as being a bounty hunter, an employee at Short Street Package Store in Nettleton, and at Bauhaus in Tupelo. Roy was a member of Tranquil United Methodist Church in Wren.

In his younger years he enjoyed going fishing and hunting, as well as playing men’s softball and football, and traveling. He was a hard worker and a very private and honest person. He was an avid Chicago Cubs Baseball and WWE Wrestling fan.

Roy was also a funny and straight-forward man, who enjoyed listening to R & B and old rock songs. He was very proud of straightening his life up and doing anything for St. Jude Children’s Research Hospital. Roy enjoyed going out to eat with his close friends John Hughes and Danny Jones.

Roy is survived by his two daughters, Tammy Smith of Saltillo and Jennifer Hayes of Amory; 3 step daughters, Khristy Robinson, Katie Barnes, & Nicky Kent, all of North Carolina; a sister, Mary Lee Busch (Ronnie) of Christiansburg, VA; 4 grandchildren, Justin Hutson, Jimmy Smith, Natalie Hayes, & Anna Grace Sargent; and a host of nieces and nephews.
In addition to his parents, he was preceded in death by a sister, Gloria Ann Duncan; a granddaughter, Harley Ruffin; and a grandson, Roy August Wehrman.

Visitation will be from 12 P.M. Noon until time for services Sunday.

Memorials may be sent to St. Jude Children’s Research Hospital in Memphis, TN.
Memories and condolences may be shared with his family at eepicklefuneralhome.com.