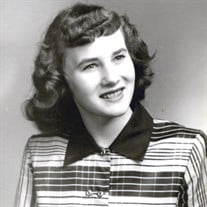 Billie Fayne Brooks Terrell went home to be with her Lord and Savior, Jesus Christ, on Monday, August 16, 2021. She was born October 31, 1932, in Water Valley, MS. After graduating as her high school valedictorian in 1950 she completed business school. She married Montgomery Young Terrell, Jr. in 1952 and traveled with him while he served in the United States Air Force. While stationed in Tucson, AZ, she worked for a local bank and had their first daughter, Cheryl Ann. After returning home to Memphis, TN, she worked for many years at Whitehaven Medical Clinic and had their second daughter, Pam, and son, Greg.
Billie is described by her family as a Godly woman, wife, mother, sister, grandmother, aunt, friend, and a faithful servant of Jesus Christ. She was a student of the Bible and was active in church. After retiring and moving back to Water Valley in 1989, she became very involved at Sylva Rena Baptist Church where she served as church secretary for many years and taught a Sunday School class. She loved to sing hymns and did so up until the final days of her life. The greatest joy in her life was serving her family, which she did faithfully.
Billie is survived by her dedicated husband of 68 years, Montgomery Terrell, Jr.; one son, Greg Terrell of Water Valley, MS; two daughters, Cheryl Harmon (Tommy), Pam Rote (Martin) all of Olive Branch, MS; three brothers, Bob Brooks, (Patsy), Frank Brooks (Raye), Travis Brooks (Amy) all of Water Valley, MS; one sister, Eva Frances Fultz, of Shreveport, LA; seven grandchildren, Matthew Harmon (Lana), Allison Hughes (Rob), Caleb Terrell (Kacey), Colby Terrell (Charla), Shelah Radke (Aaron), Katie Turner (Mike), Paula Rote; and twelve great-grandchildren. Billie was preceded in death by her father, Frank Emmett Brooks, her mother, Eva Jordan Brooks, and by her brother, Currie Brooks.
Due to the chance of threatening weather, the service will now be held Thursday, August 19, 2021 at 10:00 AM in the Henry Chapel of Seven Oaks Funeral Home in Water Valley, MS. Memorials may be sent to Sylva Rena Baptist Church or Walker Cemetery Fund.