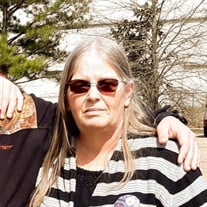 Terri Renee Krickbaum Weston passed away on August 25, 2021 at North Mississippi Medical Center in Tupelo. Terri was born on September 12, 1959, in Torrance, California, to the late Kenneth and Theresa Taylor Krickbaum.

A family Memorial Service will be held at a later date. Calvert Funeral Home of West Point is entrusted with the arrangements.

She is survived by her daughter: Nicole Bramlett Wilson (Allan) of Cedar Bluff, three grandsons: Donald, Holden, and Kalib Getz of Caledonia, one aunt: Debra Caspell (Anthony) of West Point, and one nephew: Sean Higginbotham of Springfield, Missouri.

In addition to her parents, she was preceded in death by her husband, Randy Bramlett and one sister, Regina Krickbaum.

"My desire is to depart and be with Christ, for that is far better." Philippians 1:23