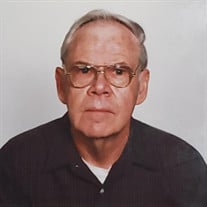 Roy was a graduate of Amory High School and ICC. He was a Veteran of the US Army serving in Germany. Roy married Shelby Jean West Westbrook on June 30, 1956 and they had three children. He worked as an electrician for his father for several years until working for Kerr McGee, where he retired after a total of 32 years of service. He volunteered for Meals on Wheels and was a Member of the American Legion Post #25.

He was a quiet man, hard worker, and great dad. He loved God and was a member of Becker Baptist Church and also attended Lifepoint Church. His family meant the most to him and he enjoyed traveling.

Roy will be missed by all that knew and loved him.

In addition to his parents, he was preceded in death by his brothers, Eugene Westbrook and Durren Westbrook.

Visitation for family and friends will be held on Friday at the funeral home from 12:00 pm until the service hour.
Memories and condolences may be shared with his family at eepicklefuneralhome.com.