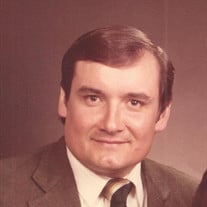 Michael Kenneth Ericksen, 76, peacefully passed away Friday, September 17, 2021, surrounded by his loving family. He was born July 14, 1945, in Mesa, Arizona, to Kenneth J. Ericksen and Norma Young Ericksen. His father passed away at 32 when Michael was fifteen months old. He and his mother were devoted companions until her death in 2003. She instilled in him a love for the His Savior and the Gospel. He graduated from Fullerton High School in Southern California in 1963. In 1964, he was called as a Missionary for The Church of Jesus Christ of Latter-Day Saints, serving in the Canadian Mission. In 1966, he attended Fullerton Jr. College and continued on to Cal State Fullerton for a semester. In 1968, he married his eternal companion Ricki Morris of Fullerton. In 1969, he was drafted into the US Army where he served honorably until 1971. He began working for Summa Corporation, the Corporate Head of the Howard Hughes Organization in California, and in 1976 he and his family were relocated to Las Vegas, NV with the Corporation. He was the Transportation and Operations Supervisor for the company and retired in 1989. He continued his studies and received a Bachelor of Arts Degree in 1978 from the University of Nevada, Las Vegas. Michael and his family moved to Baldwyn, MS in 1991. He worked at Cooper Tire from 1992 until 1998 at which time he retired.
Michael was a devoted son, husband, father, grandfather, great-grandfather, brother, uncle, friend, and mentor. He was a lifetime member of The Church of Jesus Christ of Latter-day Saints where he served in many callings over the years including Scoutmaster for the Boy Scouts, seminary teacher, and Branch President in the New Albany MS Branch. He was an Eagle Scout and had his Duty to God Award, and he helped many boys to prepare for their Eagle Scout awards over the years. Mike was a dedicated reader, enjoying the scriptures and other religious materials as well as how-to books as he was constantly wanting to learn how to do new things. He loved all kinds of music, especially Pavarotti– which he also liked to share with others—even though they may not have enjoyed it quite as much as him. He began playing the piano at age eight, and he was always willing to play for Church as well as accompany others, especially his mother and daughter. He enjoyed playing sports, especially baseball when he was young, as well as playing on adult teams later on.
Michael was an avid car enthusiast, an interest which began at an early age and continued throughout his life. He shared his knowledge of building cars as a teaching tool for his sons, as well as scores of others who wanted to learn. He and his sons and friends built several race cars over the years. He belonged to the NHRA and participated in Pro Gas competitions all over the country.
Michael loved his family and enjoyed spending time with them, and his greatest desire was to be an eternal family. He and his wife Ricki and their four children enjoyed spending time together doing a multitude of activities, and he was especially proud of his 5 grandchildren and 4 great-grandchildren when they came along. To them he is their “Pa Mike”. He enjoyed it when they participated in school activities and sports, always encouraging them to do their best.
Funeral Services for our beloved Mike will be Thursday, September 23, 2021, at 2:00 PM at the Booneville Ward building of The Church of Jesus Christ of Latter-Day Saints, located at 404 W George E. Allen Drive in Booneville. Additional visitation prior to service time will be from 12:00 PM until 1:300 PM. Visitation will be held from 5:00- 9:00 PM at the Booneville Funeral Home on Wednesday, September 22, 2021. Due to COVID 19, the family request that mask be worn. Bishop Michael Byrd will be officiating. Burial will be in the Mormon Cemetery. Booneville Funeral Home will be in charge of the arrangements.
Mike Ericksen is survived by Ricki, his wife of fifty-three years; four children, Allyson Bernat (Sean), Vanessa Ericksen, all of Murray, UT, Ryan Ericksen (Sonya) of Pine Grove, and Steven Ericksen (and special friend, Tammy Almand) of Baldwyn. Five grandchildren, Jessica Hartness (Casey), Dillan Ericksen, Madison Ericksen, Gracie Ericksen, and Burke Ericksen; three great-granddaughters, Everleigh Harrell, Alyssa and Aleah Hartness.
He was preceded in death by his precious great-granddaughter, Aleigh Fayth Perrigo.
Pallbearers will be Dillan Ericksen, Sean Bernat, Sam Jepson, Shane Gray, Bart White, and Paul McCutchen.
Honorary pallbearers will be David Morris, Sr., Kevin Morris, Casey Hartness, Tommy Murphy, Randy Piersky, Rick Howell, Mickey Wood, Bruce Hirschi, Ned Floyd, Randy Hill, Burke Ericksen, All of Uncle Mike’s Nephews, Dr. Don Presley, Dr. Erik Dukes, James Roswell, Danny Henry and Curt Henry.