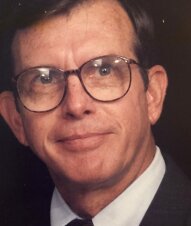 Hugh Tucker Comish, Jr passed away at the Carrington Nursing Home on October 6,
2021 at the age of 87. He was born August 4, 1934 in Indianola, MS to Hugh Tucker
and Lois Lee Blush Comish. Hugh graduated high school from Independence High
School in LA and attended LSU where he graduated in Architecture Engineering. After
meeting the love of his life on a blind date he married Nancy Mynihan and they wed on
January 4, 1958. He enlisted in the Army and served at Ft. Belvoir, VA before he was
honorably discharged. After the Army he began practicing Architect and moved to
Clarksdale, MS where he eventually became partners and opened his own firm,
Barnes/Comish/Deweese Architects. He retired in 2000 and moved to Starkville, MS.
He was an LSU fan but quickly became a MSU fan with 3 of his 4 children attending and
graduating from MSU. As long as MSU was not playing LSU he was cheering for the
Dawgs. He loved to watch all sports and loved to keep up with all the stats.

He was born and raised Baptist. He served as a Deacon in the Clarksdale Baptist
Church for many years before moving to Starkville. When he met Nancy and married,
she was Catholic, so they agreed to both attend each other’s church and practice both
faiths. They lead marriage classes together and participated in each other’s church’s
communities. They attended First Baptist Church and Saint Joseph Catholic Church
when they retired to Starkville. They would go to mass at St Joseph’s on Sunday
mornings then leave and go to First Baptist Church Services until his health declined.
He was a Strong Christian Man, loving husband and father whose faith was lived
throughout his life.

He loved his family and is survived by Nancy his wife of 63 years and their four children
and their families. Brian (Kathryn) Comish and their children, Emily, Jordan, Johannah
and Timothy. Scott (Darlene) Comish and their son Matthew, Keith (Cathy) Comish and
their sons, Clark (Katleyn) and Kendall (Katherine). Leigh (Tim) Ryan and their
daughters Claire and Evelyn. He is also survived by 2 great grandsons, Rowen and
Rhett Comish. He is survived by one sister in law, Joan Dismore and one brother in
law, Otis Lee. He is predeceased by his parents and his sister Gloria Lee who passed
away this past Monday.

A private family funeral service will be held at Saint Joseph Catholic Church on
Wednesday October 13 at 10am with inurnment at the Ray and Gerry Orgler
Columbarium located at the church following the mass.

Memorial donations may be made to: Saint Joseph Catholic Church in Starkville, MS or Charity of Choice.