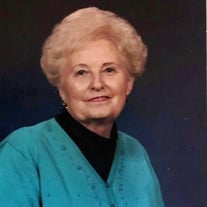 Margaret Kathleen Tubb Colburn, 89, was welcomed on November 14th, 2021 into the Lord’s arms and her heavenly home. Kay was born on August 18, 1932, in Hatley, Mississippi to Prentiss Tubb and Mary Isabell Whitehead Tubb, the youngest of 9 children.

Kay attended Hatley Schools, graduating as valedictorian of the Senior Class of 1950. She married William Harvey Colburn in 1951. After Harvey’s discharge from the Army, they returned to Amory and raised three children, Sheila, Diane and Brent. Kay loved her family and devoted her life to them. She was a wonderful Mother and caregiver.

Kay was a member of First Baptist Church and attended the Grace
Sunday School class. She enjoyed studying her Bible and loved to help and care for others. She also enjoyed traveling, going to estate sales, playing board games, watching old movies and listening to big band music. She especially loved spending time with her lady friends known as “The Mighty Five”.

In February 2010, Kay suffered a massive stroke. She has resided at the Meadows Nursing Home in Fulton, Mississippi until her entering Heaven’s gates. The residents and staff became her extended family.

In addition to her parents, she was preceded in death by her husband, William Harvey Colburn; son, William Brent Colburn; six sisters and two brothers.

A “Celebration of Life” will be held on Wednesday, November 17, 2021, at 1:00 p.m. in the Pickle Funeral Home Chapel with Bro. Jimmy McFatter and Bro. Bobby Howell officiating. Honorary Pallbearers will be her grandsons: Matt Chism, Joseph Senter, Tim Senter, Andrew Chesnutt, Chance Futurell.

Please share your condolences and memories with her family at eepicklefuneralhome.com