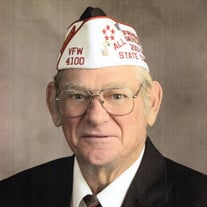 James Elbert Gordon Sr, age 85, passed from this life Monday, November 15, 2021, at the V.A. home in Oxford, MS. He was born June 18, 1936 in Water Valley to the late Elmer and Elvie (Walker) Gordon. James was a life long resident of Water Valley, and honorably served our country in the United States Army. In 1960, during his time in the Army, James married his wife Virginia, better known as “Lou”. After his service, James continued his passion for working with his hands. He practiced his craft at a number of different Ford dealerships, including Hendricks Machine Shop in Water Valley. In 1964, he and “Lou” bought property and opened Gordon’s Repair Shop on Hwy 315 where he worked until his retirement. James was always proud of his service and became a vital member of VFW post 4100 in Water Valley where he served in many capacities. In 2001, James also served as Ms State VFW Commander, a position which brought him much pride. In his free time, James loved to fly his own plane, operate heavy machinery, and spend time in Ocean Springs with his family.

Visitation is planned for Thursday, November 18, 2021, in the Gardiner Room at Seven Oaks Funeral Home from 11:00 AM until 1:00 PM. Services will follow at 1:00 PM in the Henry Chapel of Seven Oaks with Bro. Bobby Jones officiating. Burial will be in Walker Cemetery.

As well as his parents, James was preceded in death by his wife Virginia Gordon; one son, James Gordon Jr; two sisters, Virginia Donaldson and Faye Nelson; and one step grand-son, Robert “Jr” Maness.