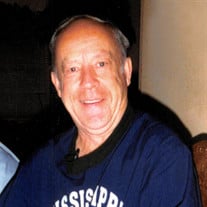 Columbus – Thomas Riley Kennedy, 87, passed away on November 30, 2021, at Baptist Memorial – Golden Triangle Hospital, Columbus, MS. He was born on November 15, 1934 in Smithville, MS, he was a son to the late Aura and Eunice Towery Kennedy.

Thomas grew up in Monroe County and graduated from Smithville High School. He attended Itawamba Junior College for two years and then enlisted. A Patriot, he served in the United States Army for a couple years during which time he was awarded a Certificate of Achievement for “exceptionally meritorious performance of duty”. He then furthered his education at Delta State where he received a Bachelor in Science in Accounting. A man with a great work ethic, he worked literally until he passed away. Initially he worked in Government Accounting in New Orleans, then at the Memphis Cotton Company, and lastly he was employed at the Caldwell Furniture Company in Columbus. Thomas was very intelligent, organized and meticulous.

An active man who never shied away from a challenge, after the age of 40, Thomas started running and eventually he began running marathons. During his life time, he ran over a total of 40,000 miles in marathons with the New York Marathon being his favorite. He loved to train younger people how to train to run marathons and he also enjoyed encouraging the elderly to run. He was so motivational that he convinced his own mother to start running and she ran up until the age of 94. Thomas was a member of the Columbus running club and through the years they made many wonderful memories.

Besides running, he loved to listen to music, with Classical music being his favorite. He was a quiet man who at times was a little stoic. His family meant the world to him and he would do anything for them. He also liked to read as well as be outside while he was hunting or fishing.
Thomas was an amazing man with great stamina for life and running. His smile will be missed greatly by those who knew and loved him. The memories of him will live on in the hearts of his loved ones.

Left behind to treasure the memories are his sister, Bettie D. Kennedy, Destin, FL; niece, Cindy Lane Kennedy; nephews, Marlin Flurry and Dudley Bryan Kennedy, Jr., all of TN; sister-in-law, Jeanette Kennedy, TN.
In addition to his parents, he was preceded in death by his brother, Dudley Bryan Kennedy.

A Celebration of Life Service will be held on Saturday, December 4, 2021 at 11:00 am at E. E. Pickle Funeral Home in Smithville with Dr. Lloyd Sweatt officiating. Burial with Military Honors will follow at New Hope Cemetery, Hatley, MS.

Visitation for family and friends will be held on Saturday, December 4, 2021 from 10:00 am until the service hour at the funeral home in Smithville.