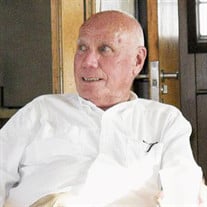 Aero George English, 91, passed away on January 20, 2022 after a sudden illness. Aero was born on June 23, 1930 in Wiggins, MS. He spent his formative years in Hattiesburg, MS, graduating from Hattiesburg High School and Southern Mississippi University. Shortly after graduating from Southern Miss, Aero joined the United States Navy.

With his given name, Aero was destined to fly and remarkably obtained his pilots license at age 14, one year before getting his Mississippi drivers license. Like his brother, Aero became a corporate pilot, and relocated his family to Amory in the early 1960’s to be the chief pilot for Scribner Equipment Company, Inc. Aero remained employed by Scribner until his retirement in 2010. While Aero flew powerful airplanes for a living, he enjoyed flying all types of aircraft in his spare time. He is perhaps best remembered in Amory for flying his Skybolt (aka The Red Baron), an open cockpit aerobatic biplane that often caused observers to be overcome with a sense of trepidation at the sight of his stunts. Aero also developed a fondness for flying aircraft without any power, also known as glider planes.

Throughout the years, Aero had the privilege of piloting numerous VIP’s and dignitaries, including Presidential candidate Jimmy Carter, numerous U.S. Senators, U.S. Representatives and several State Governors. Oftentimes, Aero volunteered ambulatory services for critically ill patients who needed to be transported to specialized regional medical facilities. When Archie Manning was at Ole Miss, Aero often flew Archie’s mother along with several of the Ole Miss Cheerleaders to away games in remote locations such as Gainesville, Lexington, Knoxville and Columbia. Most importantly, Aero trained many local pilots over the years and took numerous youngsters on their first airplane ride.

Aero was honored in 2015 with the dedication of the new Monroe County Airport terminal, which was named after him. Additionally, he received the Federal Aviation Administration’s Wright Brothers Master Pilot Award, bestowed upon him for following safe flight operations for more than 50 years.

Special recognition and thanks go to Taylor Burdine and Sandra Colburn for watching over Aero for several years and for putting up with him on a daily basis. Aero would also want to thank his many Monroe County Airport buddies, special friends who became his family after the loss of his two children. Memorial donations may be made to Wings of Hope, an aviation nonprofit that operates no cost transport medical services, primarily assisting children. Donations may be sent to Wings of Hope, 18370 Wings of Hope Boulevard, St. Louis, MO 63005 or online at WWW.WINGSOFHOPE.NGO.

Please share your condolences and memories with the family at eepicklefuneralhome.com