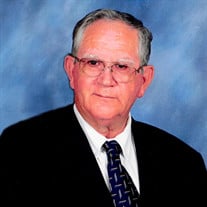 Smithville – William “Billy” Lochridge, 84, passed away on Wednesday, February 16, 2022, at North Mississippi Medical Center, Tupelo, MS. He was born in Monroe County, on May 15, 1937, to the late Raymond and Eloise Motes Lochridge.

Billy grew up in Monroe County in a very large family with eight other siblings. He learned the value of family early and graduated from Greenwood Springs High School. He was a great provider, working his whole life in manufacturing, retiring from Walker Manufacturing in Aberdeen as a Press Operator. He married the love of his life, Peggy Joyce Gosa Lochridge, on September 4, 1964. Together they were blessed with over 57 years of marriage, with two children, a son and a daughter, as well as many grandchildren and great-grandchildren.

He believed in the Lord and loved his church family at Smithville Church of Christ. He knew how important Salvation was and always enjoyed serving the community with his fellow church members. Billy liked to listen to both Gospel and country music. He was a God fearing man who loved his wife, kids, family, his church family, with his brothers and Joe Reeves being his very best friends. Billy was honest, always told you the truth, and at times might have come across as blunt yet he was just matter of fact. You always knew where you stood with Billy.

An avid sports fan, who enjoyed watching college football, Billy liked anything Ole Miss and the St. Louis Cardinals. He enjoyed traveling and being outside where he liked to fish, attend football games, and just be with his family. Above all, Billy worked hard to provide for his family, whom he loved, and he ensured that they knew the Lord. Billy will be missed dearly. He leaves behind a legacy of a man who was solid in his faith of Christ and a blessing to his family.

In addition to his parents, he was preceded in death by his sisters, Mary Duncan (Romie), Maxine Coleman (Bobbie), and Sue Alred (Willie); a brother, Jim Lochridge (Marion); and an infant sister, who passed at birth, Jeanette Lochridge.

A Celebration of Life Service will be held on Saturday, February 19, 2022, at 2:00 PM at the Smithville Chapel of E. E. Pickle Funeral Home with Mr. Mickey Beam officiating. Burial will follow in Young Memorial Garden, Smithville, with pallbearers being Nick Lochridge, Brent Lochridge, Daniel Smith, Steven Bigham, Chris Christian, and Brian Lochridge. Honorary pallbearers will be his brothers.