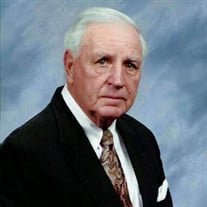 Amory – Charles Mace Clement, 93, finished his work here on earth and began his new life in Heaven on Saturday, February 26, 2022. He was born on January 6, 1929, in Blue Springs, MS, to the late George and Nannie Deaton Clement.

Charles spent the first part of his childhood in Blue Springs, MS, then he moved with his family to Memphis and lastly they transferred to Amory, MS in 1940. He graduated from Amory High School in 1946 and soon there after moved to Washington D.C. to attend college there, where he obtained a Bachelor of Science in Business with a Minor in Accounting. After graduation, he worked briefly for the FBI. He served our country during the Korean Conflict and eventually ended up back in Amory, MS. He worked for the CIT Collections Agency in Amory and was laid off during the recession.

He then became owner of a Service Station until he ran for sheriff and won the race. A respected citizen of his community, he was elected Sheriff for Monroe County, serving from 1972-1976. After his term for sheriff, he ventured into the gas industry. Through determination and faith, he started his own business, M & W Butane Gas Company in Amory, MS in 1976, and he successfully ran the business until 2016. Charles was a great provider for his family and they were blessed because of his hard work and dedication. Charles was a workaholic, and it was his work ethic and integrity that enabled him to be successful in all aspects in life.

In July of 1953, he met his sweetheart, Margaret, they were engaged in September and got married on December 6, 1953. Together God blessed them with 68 years of marriage and three children and many grands and great-grands. Charles loved the Lord and was a member of St. Andrews United Methodist Church where he faithfully served as long as he was able.

In his free time, he loved doing anything with his family and grandchildren. He learned to fly a plane and took many loved ones up to experience the invigorating feeling of flying in a small engine plane. Over the years, he and his wife would travel to many places, go boating, and just spend time with his family. Some of his close friends were Ray Jones and Bill Steverson. Charles liked to garden, be outside, and listen to gospel and 60’s music.

As the years passed, many wonderful memories were made with Charles and will never be forgotten. His family is forever grateful for all the selfless hours he sacrificed to provide for his family as well as all the love he gave through the years. He will be missed dearly.

A Celebration of Life Service will be held at 2 PM, Tuesday, March 1, 2022, at St. Andrews United Methodist Church, Amory, with Rev. Brian Gordon and Rev. Dr. Jim McClurkan officiating. Burial will follow in Haughton Memorial Park, Amory, with pallbearers being his five grandsons, Al Wiygul and Eric White, a Grand Son-in-Law. Honorary Pallbearers will be Ray Jones and Bill Steverson.
Visitation for family and friends will be held on Tuesday, March 1, 2022, at the church in Amory, from 12:00 pm until the service hour.
Memories and condolences can be shared with his family at EEPickleFuneralHome.com.