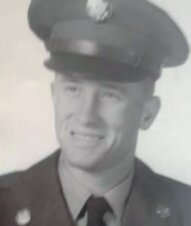 He retired from Herschede Hall Clock Company after over 20 years and then went to work for Ford Motor Company in Mathiston, MS and drove a school bus for seven years after his retirement. He was a U.S. Army Veteran and an active member of First Baptist Church in Starkville. Mr. McKee also was active in a bowling league for many years and loved going to auctions. He enjoyed hunting, fishing, going to racetracks and Talladega with his sons and grandsons. He loved being at all of his grandson’s ballgames and always had a bag of candy, a Gatorade, and money for the concession stand. His love for his family showed in all he did. Family gatherings were what he looked most forward to. He would sit in his chair in the background and just relish the view of all his children, grandchildren and great grandchildren playing ball and playing on his tractor. He was also an expert fish fryer and eater. He was a loving husband, father and papaw.

Visitation for Mr. McKee is scheduled for Saturday, March 26, 2022 from 10:00-12:00 at Welch Funeral Home in Starkville, MS, with the funeral service immediately following in the funeral home chapel. Rev. Clifton Curtis will conduct the service. Burial will be in the Sapa Baptist Church Cemetery in Eupora, MS.