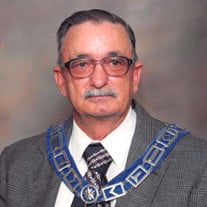 James grew up Monroe County and graduated from Amory High School in 1962. A down to earth man, who put others first, he entered into the Army shortly after graduating from High School. He was a patriot and served in the United States Army as a Sergeant E5. After serving, he worked in the Transportation Industry as a truck driver. James was also an entrepreneur who owned and operated his own Rod and Reel shop in Bigbee, MS. He was very talented and meticulous on the fine details. Many the prize fish was caught with his handiwork.

He was a supporter of St. Jude, the NRA, and a longtime member of the Masons with whom he served as a work shift Master and held a state officer position. He was blessed by God with two daughters, and he was very proud of their accomplishments in life. James was a member of Cason Baptist Church. He liked to listen to Gospel music and classic country music. A humble man, he never had a bad word to say about anyone. He loved his family fiercely and often times he would joke around to make people laugh.

His downtime was filled with many hours in his shop working on his fishing gear, flying ultralight air planes, and riding on his motorcycle. The outdoors was his sanctuary and he and his friends, Billy Williams and Tom Burnside made a lot of memories through the years.

Dean’s family and friends consider themselves blessed to have had such a wonderful man in their life. James will be missed dearly yet they know that he is in peace. The great memories will live on in their hearts.

In addition to his parents, he was preceded in death by his great-granddaughters, Vanessa and Cheyenne Dean.

A Celebration of Life Service with Masonic Rites, will be held on Wednesday, May 25, 2022, at 2:00 pm at E. E. Pickle Funeral Home in Amory, with Bro. Matt Long officiating. Burial will follow in Haughton Memorial Park in Amory, MS.

Visitation for family and friends will be held on Wednesday, from 1:00 pm until the service hour at the funeral home in Amory.