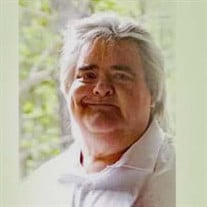 Willis (Butch) Gerald Sanders, Jr. 61, passed away at his home in Amory on May 31, 2022. Born in Libertyville, Illinois, he was a son of the late Willis Gerald Sanders, Sr. and Peggy Wilbanks Sanders. Butch had many jobs throughout his life until he became disabled.

Butch was an artist. He studied music at ICC, Blue Mountain and Ole Miss and could play most woodwind instruments which included a clarinet, flute and oboe. Years ago, he was the choir director for Becker Baptist church. He enjoyed listening to classical music and the music of the 1970’s. In his spare time, he loved to draw and loved to spend hours using the talents that God had given to him.

Spending time with his family was very important to him. In his spare time, he liked to watch movies and to cook. Some of his favorite foods to cook were lasagna and fried chicken.

At this time, there are no services scheduled. Please remember his family in your prayers during the difficult days ahead.

Memories and condolences may be shared with his family at eepicklefuneralhome.com