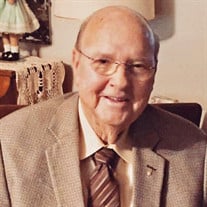 Bro. Ferman Swan Anderson, Jr., 89, finished his course here on earth and began his new life in Heaven with a crown of righteousness bestowed to him by his heavenly Father. Born on April 30, 1932, in Okolona, MS, he was the son of the late Ferman Swan Anderson, Sr., and Hadie Elaine Anderson.

Bro. Ferman knew and proclaimed the almighty power of God through the promises in the inerrant Word of God while working his entire life as a Pastor. Ferman loved the Lord as his Savior who showed “the way, the truth, and the life.” And He believed and loved the Church as the “Hope of Glory” while pastoring and loving the members of the Church, whom he considered his family. While pastoring, he was part of the Minister’s Association, the Church Planting Association, and the Christian Church Camp Association. Everything he did was to grow God’s Kingdom, as he knew that the church family was the fertile ground for the Gospel to be spread and grow. He was a humble man, seeking no spotlight, no riches, whose main desire was to draw closer to God, love his family, and help others feel the love of the Father. He always loved regularly calling and gathering with his church family. His most significant accomplishments in life weren’t done for publicity or self-glory, but to bring glory, praise, and honor to His Heavenly Father, to simply help lead others to Christ, and to hear “well-done though good and faithful servant.”

A strong Christian role model for his family, he was a faithful son, brother, husband, and a loving father, grandfather, and great grandfather. He was proud of his country and felt he was a rich man because God had blessed him with two loving wives and four wonderful children who all loved the Lord as their Lord and Savior. Bro. Ferman enjoyed gardening, growing a beautiful yard, collecting coins, and always dressed to the nines. Occasionally, he liked to tease others, watch game shows on tv, and play cards. His favorite music was Gospel, especially the harmonizing music made by Gospel quartets, tenor, Perry Como, and the music played and sung by his children. His family gave him great joy, and they all feel blessed to be led by such a humble man.

Bro. Ferman’s life was not just about himself. He always had the priorities of His Lord, his family, and his fellow man. Those who knew and loved him all agree that he is in the presence of the radiant love of the Father for all of eternity.

A Celebration of Life Service will be held on Thursday, October 7, 2021, at 3:00 pm at North Boulevard Christian Church, Amory, MS, with Bro. Tim Anderson officiating. Burial will follow at Okolona Odd Fellows Cemetery, Okolona, MS, with his grandsons and nephews as pallbearers.

Visitation for family and friends will take place Wednesday evening at the funeral home in Amory from 4:00 pm until 8:00 pm.

Please, share memories and condolences with his family at EEPickleFuneralHome.com.