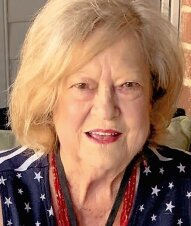 Gloria Jean Floyd Brandon – a kind, gentle, and affectionate soul whose heart was full of goodness, grace, and sunny cheer; who spoke ill of no one; who laughed with ease; who loved and cared for all she knew; who freely gave the gift of her friendship to everyone who crossed her path; who rejected negativity, cynicism, resentfulness, prejudice, bigotry, and egotism in all forms; who suffered the indignities and injustices inflicted upon others with boundless compassion and sympathy; who ached for those whom she knew to be in pain or grieving from loss; who offered words of comfort, reassurance, and hope to those who needed them during periods of difficulty, stress, and sadness; who bore the infirmities of age with dignity and without complaint; who dutifully attended all after-school plays, band concerts, church events, school dances, and sporting competitions in which any of her children or grandchildren participated, no matter how inconveniently scheduled or geographically distant; who gladly chauffeured her children and grandchildren, at any hour of the day and in any type of weather, to and from countless birthday parties, roller skating rinks, piano lessons, band camps, shopping malls, amusement parks, slumber parties, civic centers, fireworks stands, concert halls, and movie theaters; who tolerated, with patience and restraint, her husband’s love for silly British TV comedies and inscrutable, black-and-white arty movies (as well as the overcooked green beans with which he tortured the family, time and again, when they gathered for Sunday lunches), her son’s youthful devotion to all things “Star Trek” (and all of his subsequent follies and obsessions), and her daughter’s baffling penchant for watching “Breaking Bad” marathons; who confessed that her saucy daydream was to spend five minutes in a telephone booth with Paul Newman or Rick Springfield so that they could “get to know one another better”; who thought that no biscuit could reach its full potential until she first slathered it with generous amounts of butter and jelly; who could not let her daughter pass through the halls of her home without Gloria Jean asking her, several times, to “check the thermostat to make sure that it was set to 72 degrees,” and who could not let a week pass without summoning her son-in-law to come to her house because the cable TV wasn’t working (i.e., the TV refused to take the desired action in response to her telepathic instructions), the remote control for the cable TV wasn’t working (i.e., its batteries were dead), or some other TV-related frustration or malady afflicted her; who considered every item on Kentucky Fried Chicken’s menu to occupy a special and consecrated spot near the top of the nutritional pyramid, and who knew, with a deep, sincere, and abiding conviction, that white sausage gravy was its own food group; who instantly became a fan of boiled crawfish, at age 79, when she ate-their-tails-and-sucked-their-heads for the first time; who possessed a comprehensive knowledge of the location of every thrift shop, bargain store, flea market, and antiques mall within a three-state area (and knew their hours of operation and the names of their owners/managers); who held the strong opinion that there could be no such thing as “too many scented candles” or “too many lamps” in any given room of her home; who believed that her children could do no wrong and that they hung the moon (even though they routinely “forgot” to hang up their clothes, to put away the clean dishes, or to feed the family’s cat); who greeted her young grandchildren, every afternoon when their school bus dropped them off at their grandparents’ house, with hugs, a smile, and warm slices of cheese pizza; and who oftentimes was responsible for placing one of the world’s most sinfully delicious banana puddings on the kitchen table after the lunch and dinner plates had been cleared — died peacefully at her home, in Starkville, Miss., on February 14, 2022. She was 80. Gloria Jean told her children, on numerous occasions, that she did not fear death because she looked forward to being reunited with her husband and with her departed family members. Gloria Jean was a woman of unwavering faith who loved the Lord, her family, her church, and her community.

Gloria Jean was born on a farm located in rural Union County, Miss. to Cecil Roosevelt Floyd and Audrey Bell Floyd. Gloria Jean grew up in a large and supportive family that valued love, laughter, and hard work in identical measure. When she was 10 years old, Gloria Jean announced to her mother that she was going to become a teacher when she grew up — and that is exactly what she did.
Upon being graduated from Center High School, in New Albany, Miss., Gloria Jean entered Blue Mountain College, in 1959, where she majored in English education. In 1961 she married Hembree Bedell Brandon, also from Union County, and in that year she began to teach English in the New Albany public schools. In 1963 her young family moved to Winona, Miss., where Hembree began to work as the editor of the Winona Times and Gloria Jean joined the faculty of Winona High School as an English teacher. Gloria Jean fondly spoke of her years in Winona, and she often recounted, with genuine pride, the cooperative and collaborative efforts made by educators, administrators, and parents alike to peaceably integrate the public schools and to create a model school system, under the leadership of Dr. Tom Dulin and the city and county’s elected officials, that strived to provide all students with equal access to a superior education.

In 1973 Gloria Jean’s family moved to Clarksdale, Miss., where she continued to work as an English teacher and as a vocational instructor until she retired, in 1998. In 1985 she obtained a master’s degree in educational administration from Delta State University. During her career as an educator, Gloria Jean was known for her “no nonsense” style of classroom instruction and management – but generations of students will remember her for her relentless positivity; her recognition and celebration of their talents and accomplishments, inside and outside of the classroom; her humor; and for her belief in the bright and successful futures that lay ahead of each of them (regardless of the number of times that they sought reprieves from her because their dogs ate their homework).
Until her death, she often joyously and energetically spoke of the many, many loving and wonderful relationships that she formed with scores of her former students during their adult years, and she was always enthusiastic to learn of their ongoing accomplishments and achievements via social media and other sources.

Gloria Jean travelled the world during the course of her self-described “magnificent journey.” She stood before the Eiffel Tower; traversed the countrysides of Germany, Canada, Spain, and England; observed the wonders of the Northern Lights from the decks of cruise ships in the Gulf of Alaska; made lifelong friends in Sweden and Belgium; and dined in fine restaurants from California to New York. It wasn’t a bad life for a farmer’s daughter from rural Union County, Miss. — and no one appreciated it, loved it, or was more grateful for it than Gloria Jean. She truly had the time of her life.

She was preceded in death by her parents; her husband of 57 years, Hembree; her sister, Mary Sue Floyd Pannell; and her brothers, Jack, Derrell, and Ferrell Floyd.

Memorials may be made to the Methodist Children’s Homes, Batson Children’s Hospital, both of Jackson, or any children’s charity.

Announcements of an informal celebration of Gloria Jean’s life, to be held in Starkville, will be provided later to family and friends.